CWLF has partnered with Coca-Cola Foundation to launch “I Have My Right Against Bullying” anti-bullying annual campaigns since 2017. Last year (2020) with the amendment of Regulations Governing Prevention and Control of Bullying on Campuses, we called on the digital natives to stop cyberbullying. This year we continued focusing on cyberbullying issues and conducted “2021 Online Social Anxiety and Cyberbullying Experiences among Children in Taiwan Survey [1]” on 7th to 12th graders. The report showed that 21.1% children had been the victims of cyberbullying, which means in average, more than 1 in 5 children had been cyberbullied. The most common forms of cyberbullying among children are “unsolicited attack or accusation from others: 64.1%, hateful messages or comments: 50.0%, spread of unverified accusations or rumors to damage my reputation: 45.2%.” The respondents indicated that the most common place they encounter cyberbullying is message apps: 75.5% and social media platforms: 70.4%. The bullies may be their classmates or friends: 79.0%, strangers: 21.5% and online friends: 16.4%. Cyberbullying are usually an extension of children’s interpersonal relationships in the real world.

When being asked how cyberbullying affected their feelings, 66.3% respondents felt angry, 55.1% felt sad and depressed, 48.0% felt anxious and flustered. Furthermore, 1 in 4 cyberbullied children (26.0%) have had self-harm thoughts. With all these results, it is not surprising that 78.8% children think cyberbullying is a serious issue in today’s world.

Almost 80% cyberbullied children would not seek help from adults. Almost 60% think it is useless to report the situation.

The survey asks children whom they would turn to when they encounter cyberbullying events. 80.3% respondents think they can trust parents or teachers. However, only 22.4% respondents said they would report to teachers or parents when it really happens. 12.8% would not seek help from anyone. When being asked why they would not seek help from adults, 59.4% children indicated that even if they report it, the situation would not get better. 47.4% were afraid that the situation would get worse if reported. 46.9% felt that they could handle the situation on their own. “Family plays a crucial role in children’s development and is the first layer of protection when children encounter problems,” said CWLF Chief Executive Officer Li-Fang Pai. To understand the connection between cyberbullying and family relationship, the survey also includes a section of parent support scale [2]. The result showed that 70% children cannot feel the support from their parents. It also showed that the less support children get from their families, the easier they would get cyberbullied. Moreover, these children are less willing to tell parents or teachers when they encounter cyberbullying events. Parental support is important to reduce the chance of children experiencing cyberbullying. When children do get cyberbullied, parents can also be the ones children trust and turn to for help. Parent-child relationship and support are exceptionally important when major events take place.

Li-Fang Pai called on the Ministry of Education to create anti-bullying training programs for school principals and teachers. Principals can learn how to systematically resolve school bullying problems. Teachers can learn how to better handle conflicts among children and gain counseling skills.

As digital natives, children start using social media as young as 11 years old in average. 10.3% children have a social media account before 8 years old. How to socialize online has become a mandatory lesson for children. However, over 60% children (62.5%) show “online social anxiety,” meaning they feel deeply worried and anxious when socializing online. Over 40% of these children (42.4%) would pay attention to the likes and hearts they get for their posts on social media. 42.3% children care about whether their friends or classmates reply their messages. 20.7% children stay close to their cellphone all the time for fear of missing out any messages from their friends or classmates. After cross analyzing the results, it was found that children with higher scores on the online social anxiety scale have more experiences of being cyberbullied than those with lower scores (19.6%>13.6%). These children also have higher chances of feeling angry (25.6%), sad (26.1%), or anxious (29.4%) when their messages are left on read. Furthermore, when children with online social anxiety are cyberbullied, 29.8% of them have had self-harm thoughts, almost twice more than those without online social anxiety (16.4%). The problems of online social anxiety cannot be underestimated.

Another issue that troubles children is being left out in online activities, which is in the gray area of cyberbullying. Oftentimes when children shut somebody out online, they think it is a subtler way to exclude somebody and they do not think it will cause any harms (24.4%). 26.1% children would shut somebody out due to peer pressure. The situation is more prevalent among junior high schoolers than senior high. In today’s world, it is hard to separate children’s offline and online social life. The harm they get from being left out in online activities is as serious as being cyberbullied.

How should children handle their online social anxiety or times when they are left out? Li-Fang suggested that the best solution is for them to acknowledge and accept the fact that there is always somebody that just do not get along with them. Don’t think about they have to get along with everyone. Another way to decrease online social anxiety is to monitor their own time spent on social media and reduce their screen time. They can also practice mindfulness to calm their minds and face their online interpersonal challenges.

Over the past four years, CWLF and Coca-Cola Foundation have been promoting an anti-bullying campaign called “I Have My Right Against Bullying.” Through “Story Vending Machine, Bullying Tunnel No! No! No! Anti-Bullying Exhibition, and Anti-Bullying Parents Accompaniment Campaign,” we raised public awareness on bullying among children. Last year we began focusing on the most serious bullying issue children face in this digital era, cyberbullying, with our “Stop ‘Finger’ Bullying Campaign.” This year marked our fifth year. With the growth of screen time during the pandemic, children are facing more diverse and complex cyberbullying issues and they need more support. Therefore, we decided to use “I Want To Listen To You” as the theme of this year’s campaign. We invited 8 famous illustrators to create drawings based on true bullying events and shared the arts on Instagram. The stories start with showing the pain and helplessness children feel when being bullied, followed by practical solutions to the problems. Moreover, we created an Anti-Bullying LINE account also called “I Want To Listen To You” for children so that they can have a safe space to talk and vent. Professional social workers would listen to children’s stories, give their emotions a way out, and guide them to handle the bullying situations in a proper way to reduce the harm.

With the red wristband signifying “the unspeakable pain children experience when being bullied,” Aaron Yan is once again invited to be our anti-bullying ambassador. Though being a recipient of a Golden Bell Award, Aaron Yan’s school life and career had not always gone smoothly. During the press conference, he shared his own stories of being bullied in various stages of his life. He had once been hurt to the point that he could not breathe. Luckily, he was able to find proper solutions to the problems later and found his confidence to stride in life ever since. Aaron used his own stories to encourage children who are experiencing bullying events to never shut themselves down. Find the right channel to express their pain and tell their stories. Be the voice of themselves.

Aaron also mentioned that his fans would send him private messages to ask questions about bullying. Through “I Have My Right Against Bullying” project, he hoped to gain more anti-bullying literacy and provide his fans appropriate support and resources. For Aaron, he said the best solution for him to solve bullying issues is to talk about it. He would turn to his old friend to convey his feelings. Even though the problems may not be solved right away, through verbalizing his feelings and experiences, he was able to release his emotions and better understand the situation.

Li-Fang added that “it is important to find the “right” person to talk to. Many bullied children are concerned about whom they can share their feelings and experiences with. Therefore, CWLF’s LINE account “I Want To Listen To You” is designed to create a safe place for children to convey without fear and learn appropriate ways to handle the problems they are facing.”

“I Have My Right Against Bullying” project assists children in seeking help and protects them from the long term effect of bullying.


Swire Coca-Cola, Taiwan has collaborated with CWLF and launched “I Have My Right Against Bullying” anti-bullying campaigns since 2017. The company has been investing resources in youth development for a long time. This year, they delve deeper into cyberbullying issues, show the harm cyberbullying causes through illustrations, and encourage bullied children to seek help and speak up for themselves. 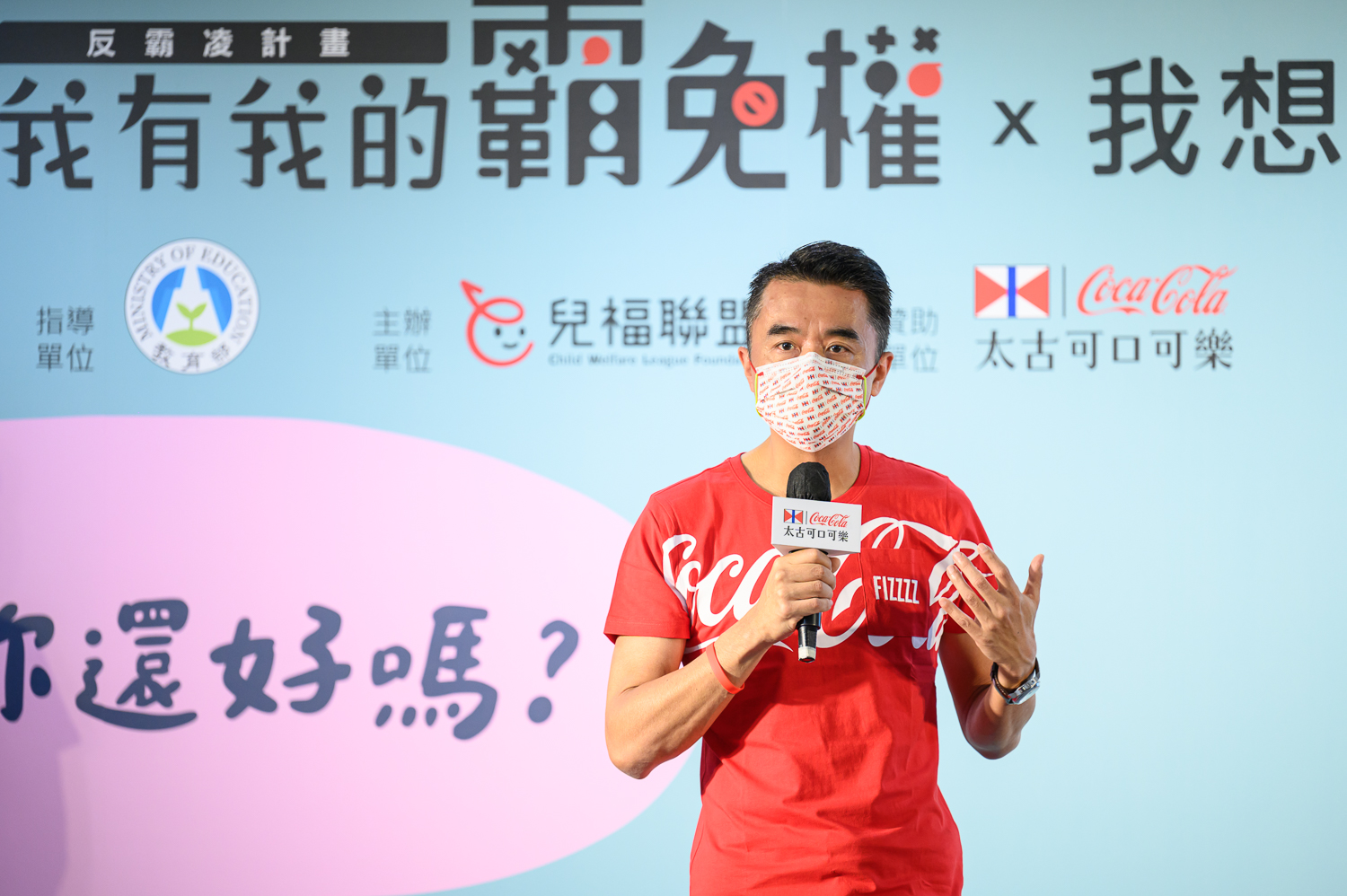 In addition to the anti-bullying hotline, CWLF created an anti-bullying account (@antibullying) on LINE, one of the most common message apps children use. Social workers would listen to the issues and concerns children share, give children a channel to release their emotions, and discuss about responses to bullying.

CWLF collects the illustrations and compiles them into an electronic picture book (https://issuu.com/cwlf/docs/_2_) to attract more public attention on bullying issues. Promote CWLF LINE account on the website. Show information of every anti-bullying helpline in Taiwan to give children more channels to share their feelings. (Anti-Bullying Website: https://antibullying.children.org.tw/)