Home  News  News content
2021-11-12
share to
According to the Ministry of Health and Welfare, 10 children were killed by caregivers in the first 6 months of 2021 due to child abuse. Over the past four years from 2017 to 2020, there were 89 little lives never having the chance to grow up.

In Taiwan, the most common form of child abuse is improper discipline. Last year, 4,522 out of 11,746 (38.5%) reported abusers inflicted child abuse because “they were used to conducting corporal punishment or improper discipline.” It was evident that there were still some parents inherited the belief “spare the rod spoil the child” or “punish you for your own good” from their parents. Although the parenting difficulties may be temporarily solved by the punishment, the impact on children later in life cannot be underestimated. More and more scientific researches showed that childhood experiences affect adulthood. Children who suffered corporal punishment may face higher risks of relational issues in their adulthood, including their parent-child relationship, interpersonal relationship, intimate partner violence, etc.

Child Welfare League Foundation (CWLF) Chief Executive Officer Li-Fang Pai explained the goals of consistently launching “Orange Ribbon | Love Children Zero Violence” campaign every year were: 11 years ago, there was a severe child abuse case where a 2-year-old boy was tortured to death, and the case had brought wide public attention. Besides offering our condolences, we started to deliberate on prevention. Therefore, we introduced the Orange Ribbon Movement from Japan in the same year and hoped to raise public awareness on the prevention of child abuse through our continued call for action. Many years have passed, but child abuse is still constantly occurring. In addition to our efforts of advocacy for primary prevention of child abuse via parenting and childcare support programs, we also hope to continue our work in changing the value and norm like “spare the rod spoil the child.” Through changing parenting styles in the home, we can give children an environment with zero violence. 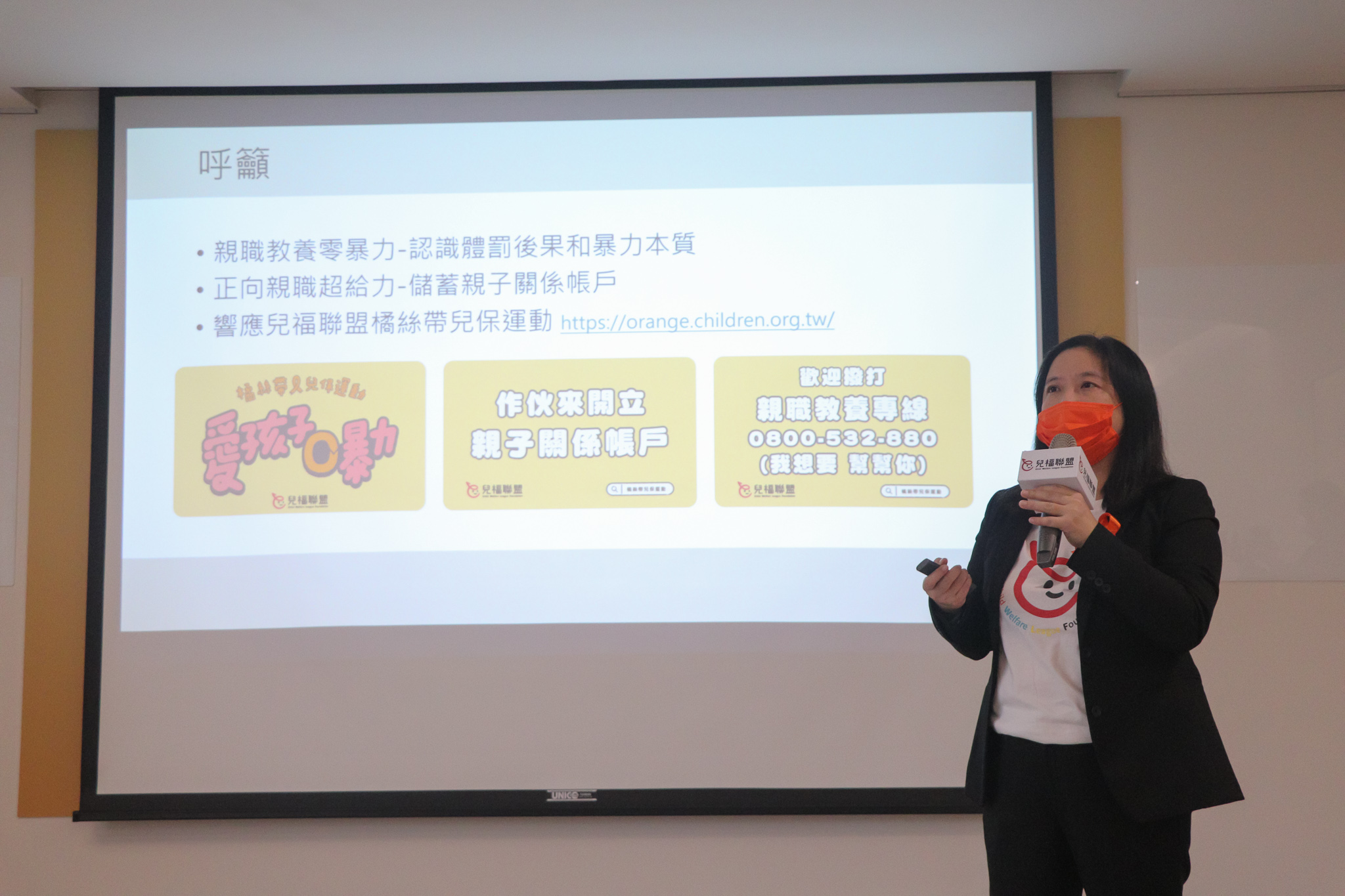 
Corporal punishment is not a lesson for children to learn. The trauma it causes can drastically affect children’s interpersonal relationships in adulthood.

In our survey, for respondents who had childhood corporal punishment experiences, 37.2% of them found it very difficult to trust other people completely, while 31.4% worried that other people would not love them. These numbers were much higher than those without corporal punishment experiences (26.3% with trust issues; 24.2% worried about not being love). 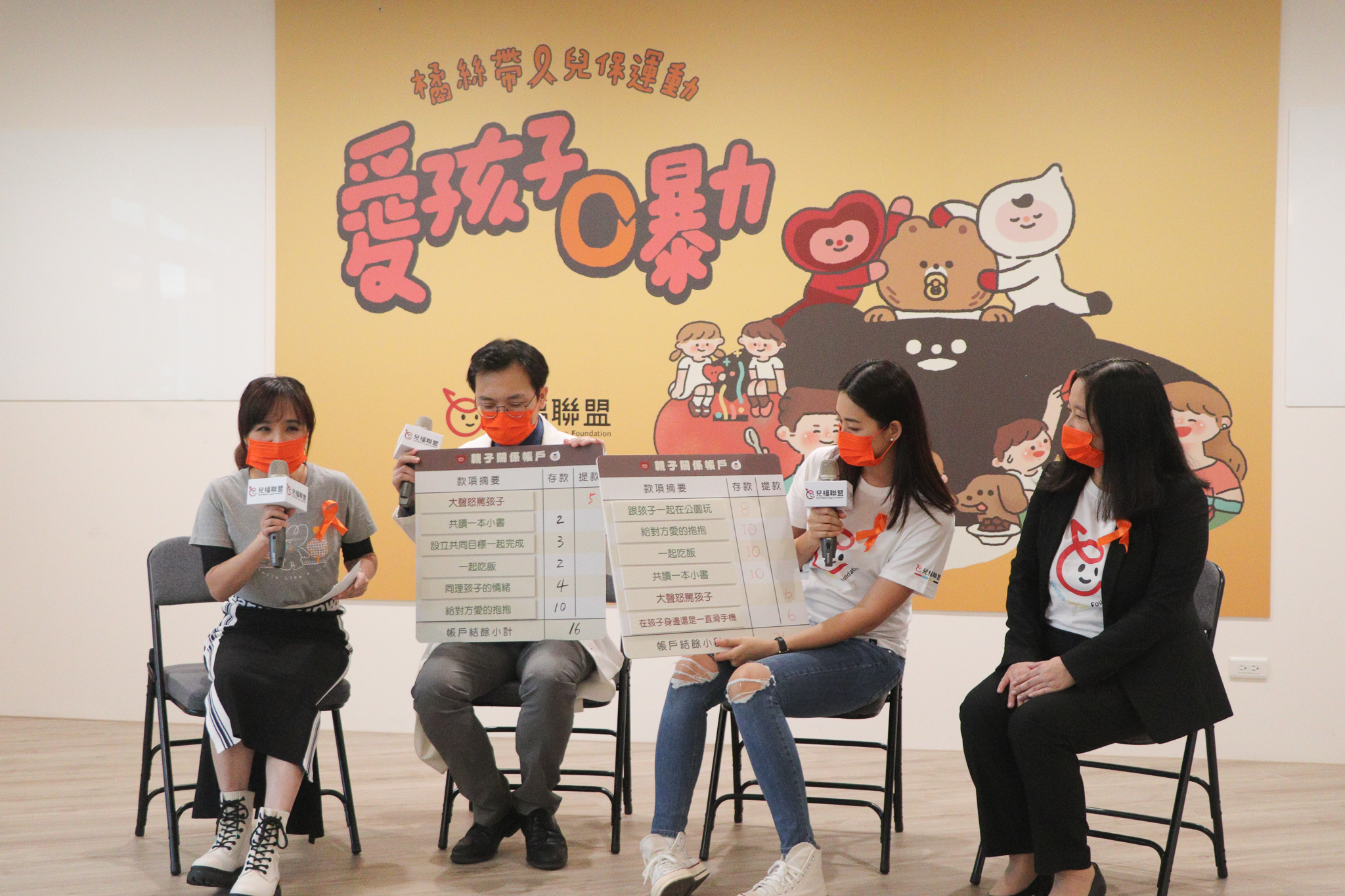 “Orange Ribbon | Love Children Zero Violence” is not just a campaign slogan, but an action to replace negative corporal punishment with positive parenting.

That is why we continue promoting “Orange Ribbon | Love Children Zero Violence” campaigns every year. Not only have we advocated against hitting children, but we also invited multidisciplinary experts to teach positive parenting skills. We provided useful tools and encouraged parents to replace corporal punishment with positive parenting. For our campaign this year (2021), we launched an activity called “Parent-Child Account.” We invite parents and children to set up their parent-child accounts and document their daily interactions with each other, including happy moments and moments they have conflicts against each other. Based on the increase or decrease of hearts in their accounts, parents can examine whether their parenting style is appropriate for the children and from there they come up with more appropriate ways to interact. With the parent-child accounts, parents and children can save a lot of memories and positive relationships.

[i] From September 17 to October 18, 2021, CWLF conducted a convenience sampling online survey on people over 18 years old in Taiwan and received 1,167 responses.
Back to list